Regarding the genesis and details of this social experiment seeking answers to my social media existential crisis please ready previous post here. I would write this blog through the day and with each update, I’d send a tweet out and share on Facebook.

Facebook is flooded with Modi haters (I am one of them) posting updates about how there is no reason for Bhakt’s to be orgasmic about Modi’s speech at US Congress. Similar standing ovations and autograph seekers were there for Manmohan Singh, and Rajiv Gandhi was on the front page of New York Times as well. Moreover there are speech monitors behind the magic of Modi’s brilliant oration.

Yes, alright, well done. How many standing ovations, autograph seekers, speech monitors – this is all we got. The fight is just getting dumber and dumber. The man is a masterminded fascist with blood on his hand. You think he won’t give a good speech? The opposition needs to do better please.

I have to tell everybody that I have an exam on 17th. It’s my 3rd term exam of MA in Women and Gender Studies. Thanks to Facebook, I never ever mentioned that I am doing MA on this blog. Because like I said it’s a grave, who informs a grave about day to day developments of your life. You come here to speak to the departed, I am here to do experiment. Quite sad.

So I am off to studies. This is paper no 6 on Gendered Nation. More later in the day.

I processed the photos from my Ladakh and Manali trip and I love my own photos. Photo shooting, processing and posting on social media are three of my favorite activities, like real good stress buster. But the misery start the moment I’ve posted the photo. Because then I am counting the number of Likes. And trust me its never enough. Once 10 used to be a good number, now I am at 50. I have a friend whose Facebook page has over 150,000 Likes. One day we were sitting together chatting up, and he looked up from his smart phone and told his wife (co-owner of the page) “One more Like. 257 total”

I used to think at that massive level, you no longer care ‘One more Like’. It’s just like another drop in the ocean, isn’t it? Apparently you do.

Anyway, so as part of this experiment, I thought I would share my photo on this blog so there’s no way to count Likes.

This is on the way to Nubra Valley, Khardungla Pass, the world’s highest motorable road. They say so but it’s neither road nor motorable. It’s just a scary narrow wobbly pass with magnificent views. 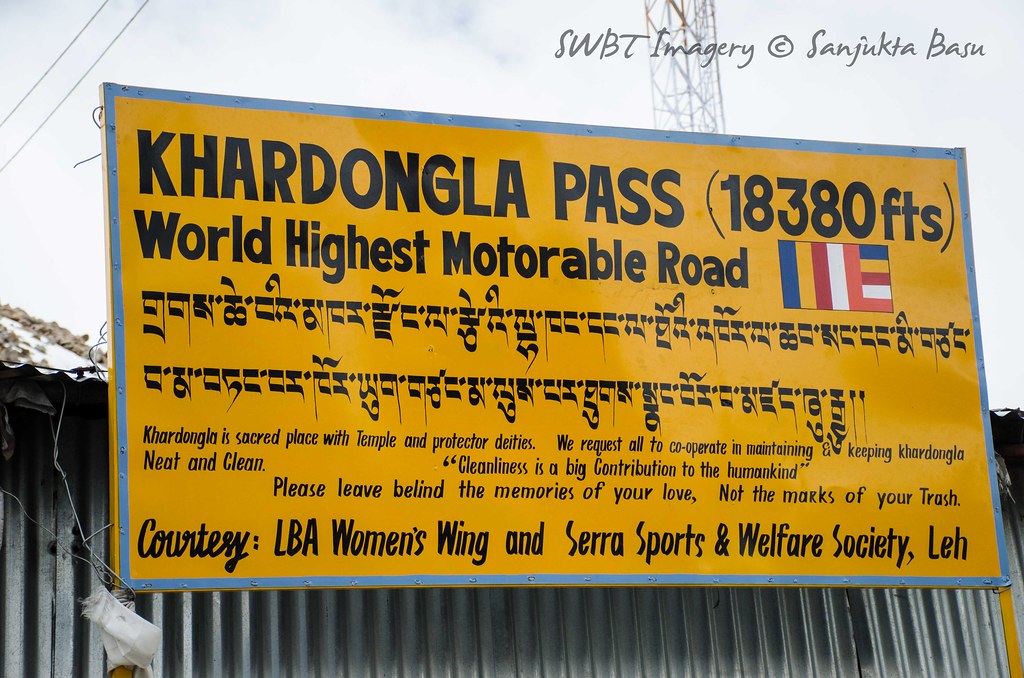 More photos of my Ladakh trip are on my Flickr Album. That’s once place where I just store photos and don’t go berserk over acceptance.

Within half a day of this experiment I realized that staying off from Twitter and Facebook also means staying off from breaking news and public outrage. I recalled last time I logged on to Facebook I was having a debate over language politics with someone. Now since I haven’t logged in for last ten hours, I wonder if he has replied to my last point, and if he is wondering why I am missing from the debate.

News is important so I switched on NDTV. (I am at home, jobless and preparing for my exam. I am always confused about where to put the full stop if you have things in bracket after a sentence has ended. Talking about full stop I read this article on NYT about how the punctuation mark is losing its significance)

Indian development worker kidnapped in Kabul (Why does media insist upon mentioning ‘Indian woman’ in the headlines?)

The kidnap of  Indian development professional in Kabul reminds me of last year’s Kabul terror attack in which we lost Dr Martha Farrell, one of PRIA‘s Director, a gender rights activist. I was working with PRIA then and I remember the day like it was yesterday. As soon as we had reached office we heard that there has been an attack in which few people are killed but many were rescued and taken to safe location. Every minute since then we told ourselves that she must be among those who survived. By noon we were told they have identified the body, she was no more. Nothing can be more frightening to realize that terrorism is just that close to you. For development workers like me, it is a dream to work with Aga Khan Foundation and be posted in places like Kabul. It’s a cliche but it’s true ‘it could be me.’

We spent the next few hours and the next day preparing for her funeral, condolence meetings. The photo you see of Martha mam if you do an image search was taken out by me from our photo library and then my team and I made the poster and banner out of it. I transcribed a quote by her from one of her video recording. That quote is now attributed to her in most of the activities released to her memorial foundation. On the day I joined PRIA to manage its Communications, Martha mam met me in the ladies room and said, “You know I am very upset that you are not joining the Gender team. But don’t worry, I would make good use of you.” Someday I hope I would go back to PRIA to manage the Gender department.

In that attack also some Aga Khan aid worker died. The same thing is happening again. I can imagine what the family might be going through at this moment. It is just so said and unfortunate. My heart goes out to them.

Pahlaj Nihalani got a good thrashing from High Court, asked how come Go Goa Gone was passed but not Udta Punjab. In response Nihalani says, I am here to hear everybody’s phatkar (verbal thrashing) I am on this post for that. Poor thing, Modi’s puppet. BJP is using him to take all the dirt of its agenda.

Hopefully Udta Punjab would be released with less cuts. It would be really funny though if it turns out to be a bad movie after so much hype. I mean it is not like Anurag Kashyap doesn’t make bad films, you know.

In Pakistan a woman burnt her own daughter to death in the name of saving family honour because the daughter went against traditions, eloped from home to get married to a boy of her choice. The girl was Punjabi and the boy Pashtun and that seems to be a major issue with her mother. Apparently the woman didn’t hide her crime, she went about the street shouting about the crime. The husband of the deceased now seeks justice. Few days back there was another incident in Pakistan where a woman was beaten to death by the man whom she refused to marry. She says no, she’s killed. She runs away to chose her own partner she gets killed. She marries the man of her parent’s choice but couldn’t get enough dowry she’s killed.

And we are told that feminism is not needed anymore, men’s rights is what we need now. Men, please be women for just one day. These brave women, who are risking their lives for basic rights, something as simple as right to choose your life partner are the real martyrs and heroes in this world. Not the armed men at the border.

So here’s the last update of day 1. I already feel I will not be able to sustain it. But let’s see.

I made prawn curry for dinner tonight. My mother is not in town, she’s visiting my sister in Dehradun. She is allergic to prawn so when she’s at home we never buy prawn after a particularly scary incident when we had to rush her to the hospital. But dad and I am very fond of prawn. Well that’s what I thought until today, that dad is fond of prawn. So I made the prawn with much enthusiasm and it looked delicious. Having served it in a bowl I brought it to the dining table and showed him how tempting it looks. He violently shook his head and hands and said, “I won’t touch it I won’t touch it. I have aloo bhaja and jheenga, you made it as you like it, you eat it as much you like it.”

Does anybody know if there’s any psychological disorder about being phobic to food, portion of food, number of items per meal? My dad has this disorder and it drives me crazy. He needs treatment but then he is 70 year old so its a bit too late. He has this forever but I am only making it public because of how much he hurt me.

Note to self, never cook for him ever. Never cook for anybody actually. When mom is not around, the kitchen is dad’s department. Actually the whole house is for him to manage. I don’t do any household chores. It is either mom or dad. I know how awful that sounds but its true. Dad loves to make his food in his own simple way and enjoys them. To him the jheenge (ridge gourd) he made is what he wants to eat tonight along with Aloo bhaja (which I made and I have some kind of specialty over it in our home and it is his most favourite food in the whole world) and tomorrow at lunch he would have the prawn curry because, apparently, in one meal he cannot eat three types of dishes.

He is a pain in the ass when we go to the restaurants because he won’t order anything, then we’d have to insist him to eat this and that. His behaviour seems like eating is a sin, one should be constantly guilty of eating, how much you are eating etc. He would never finish food and save it for next time. No matter how little the portion is he’d still save some. If there are 3 begun bhajas he’d keep one for next time. As if next time we’d run out of food. He counts portions of food, pieces of food, not more than 3 pieces he’d say or not more than two spoons (hata in Bengali).

This is definitely a disorder and my mom is dealing with this for 42 years.

Now I have closed the door, he would eat alone. And I won’t touch he prawn either.

No more blogging today. Not much progress in studies. See you all tomorrow. Good night.